Avery and Lily are 11 ½ months old. I cannot believe this year is almost over, and we’re about to celebrate their first birthdays. They are about as fun as two barrels full of monkeys! Lily is pulling up on everything and can stand for a long time. She doesn’t mind taking a tumble and getting right back up. She loves to clap.  She claps her hands; she claps her hand and foot; she claps her hand and tummy; she claps her hand and head. It works out well because Avery loves applause! Avery is more judicious with her clapping. She will clap twice, and then she looks at you as if she’s waiting for you to applaud her applause. Avery will stand with assistance but resents it. Avery uses her feet as a second pair of hands, so standing on them just seems wrong to her. She has mastered the art of rolling and scooting and prefers no other means of transport. She can roll while holding toys; she can roll over large objects and people, namely Lily; she can push off the walls, furniture, or any person or object and spin herself in any direction she chooses. 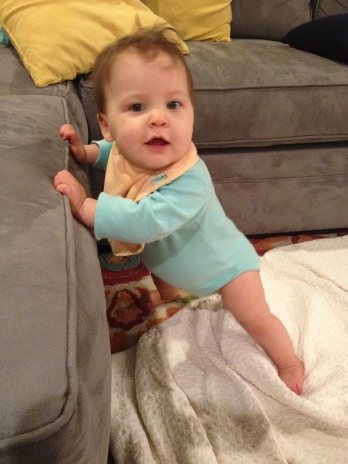 Avery and Lily have also learned to work as a team. Their favorite activity is raiding the changing table. Avery is relegated to searching the bottom shelf, while Lily ransacks the second shelf. Lily generously drops everything down to Avery after she has inspected it. The result is usually diapers strewn throughout the room. Lily also retrieves their pacifiers and will distribute them to herself and her sister. Avery also likes opening the door of their wardrobe, with her feet, and will remove all of their shoes. She likes to lay amidst a pile of their Mary Janes and Converse. What can I say? She loves shoes, like mother like daughter.

Until last night, neither child has ever been sick. It’s almost miraculous that we’ve gotten this far without any colds, stomach viruses, rashes, etc. At 1 AM, Avery “presented” with a stuffy nose. Noel and I sprang into action. Noel deftly wielded the nasal aspirator to remove the boogies from Avery’s nose, and then he set up the Vicks vaporizer in the nursery. My job was to restrain Avery while her daddy siphoned the snot from her nose, and then I got to snuggle and rock her. Frankly, I enjoyed that snuggling, because Avery has never been much of a snuggler. She likes to be held but wants to talk and play. Lily has always been our cuddle bug. While all the commotion was going on, Lily pulled up on the side of her crib so she could see the action. Once I settled in the rocking chair with Avery, she plopped back down.

As I rocked Avery, I got to experience one of the more precious moments of my life. Avery and Lily called out to each other. This may sound strange, but it reminded me of whale songs. Avery started it by calling out in a kind of moan that followed a repetitive cadence of one long note then a short, lower note. She repeated the sound over and over again. After Avery had made about three of these sounds, Lily joined in with her own sound; it was five short, low notes then a pause. They kept this up for a minute or two, briefly pausing then Avery beginning it again, each calling out in her own intonation. It was amazing to hear one sister calling out and the other sister reassuring her. I know Avery felt comfort in my arms, with her little hand over my heart, but I know she found comfort, too, in the sound of Lily’s sympathetic tones.