She’s such a rock star.

I’ve been a parent for approximately a year. Since I have twins that should give me at least double credit. The big question rolling around in my head lately is, “What is up with all of these philosophies, methods, approaches, etc.” I get that we all have our own thing, and that parenting with some sort of game plan is probably a good idea; however, it just seems like a huge amount of importance is placed on what side of the fence you’re on regarding the method of the moment. It’s almost as if, in the back of our minds, we’re saying that if we just follow this formula our kids will turn out to be super genius millionaires who dress well, leave no carbon footprint, and give generously to the less fortunate. There’s the competitive aspect as well, like your child is the proof that your method is the best. Honestly, if you live by a set of values and raise your kid accordingly, that is awesome. Unless your values include genocide or necromancy, then I would reconsider passing those on to the next generation.

I figure that parents adopt these methods or philosophies or whatever because parenting is scary. You want to do it right because you love that little toot so much. Kids don’t come with a manual, so you can’t blame a parent for trying to find one somewhere. It also feels like we’re under more scrutiny than ever, even though it is somewhat self-inflicted. You post something on Facebook and an infinite number of people get to throw their 2 cents in about it. Truly we are in a new era. My grandma would drop my 6 year old dad and his 4 year old brother off at the movies! Was it stellar parenting? No. Did any of her contemporaries say anything about it?  Not to her. Did they even know it was happening? Only because they were dropping their 6 year olds off at the movies too!

It just seems like there are times when the philosophy takes center stage over the kid.  Who hasn’t seen the parent who spouts rhetoric endlessly while their kid is destroying the Lego display at Target? The only method we adopted was sleep training. We didn’t even think of it as sleep training for the babies, more like sleep acquisition for the grown-ups. One advantage of having multiples is that you have far less time to analyze things. You live more in survival mode. At the end of the day, if everyone ate enough and is reasonably clean, you call it a win. There just isn’t time to obsess over stuff, which is a blessing since I hang out more towards the neurotic end of the spectrum. 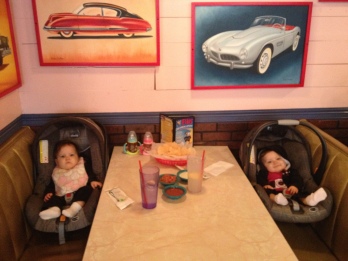 Their first time at Chuy’s. Lily loved the chips. Avery loved the beans.

This week, I purchased a potty chair. It occurred to me that Avery and Lily are going to be toddlers eventually and that there are certain developmental issues that we’ll be addressing soon, like peeing in a toilet. I also realized that neither child has ever witnessed the act of using a toilet. As I was pondering how best to approach this situation, I turned to the internet for research purposes. Stop now and google “potty training.” Seriously, just go do it. Crazy right? The number of opinions on how to potty train your child is endless! You’ve got everything from communicating with your infant about his/her elimination needs to having your toddler go naked from the waist down. Clearly this was all more than I’d bargained for. I just wanted to know if I was going to terrify my child by letting her observe me going to the bathroom. 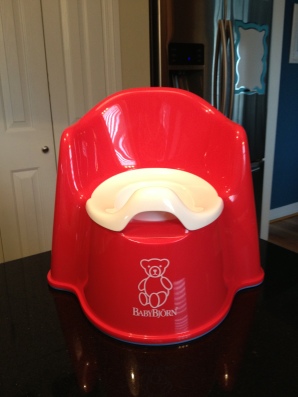 So, with the BabyBjorn ready to go, I decided to just sit Avery on it so she could check it out. My first mistake was taking her pants and diaper off. I didn’t really think about whether or not I should, I just never imagined anyone sitting on any kind of toilet while wearing pants. The second surprise was how tiny her butt is compared to the hole in the seat. Poor little Avery looked up at me in terror, flailed her arms trying to stay balanced, and started screaming. I removed her from the BabyBjorn, promptly put her diaper and pants back on, and calmed her down. So now I fear I have permanently scarred her and that she will never learn to use the toilet. If only I had followed one of the prescribed potty training methods, I wouldn’t be in this situation!!